The Modern Maritime Piracy and the Legal Action against it

Modern pirate attacks are very different from what we see on television or in the movies. The pirates are no longer legends but real criminals who use very complex weaponry and commonly assail from scaled-down motorboats. Today many part-time fishermen from many poor countries had graduated to full-time piracy because they realized that the fishing fine is way more productive than the fish.

The global community is confronting with this critical issue of maritime piracy for centuries. The pirates are no longer looking for gold and treasures. Piracy in the last decades targeted ships holding goods or oil, and in many cases the ship passengers have been taken hostage for large ransoms.

There are four major areas where the pirates’ attacks are frequent: the Gulf of Aden, near Somalia and the southern entrance to the Red Sea; the Malacca Strait between Indonesia and Malaysia; the Gulf of Guinea, near Nigeria and the Niger River delta; and off the Indian subcontinent, particularly between India and Sri Lanka. 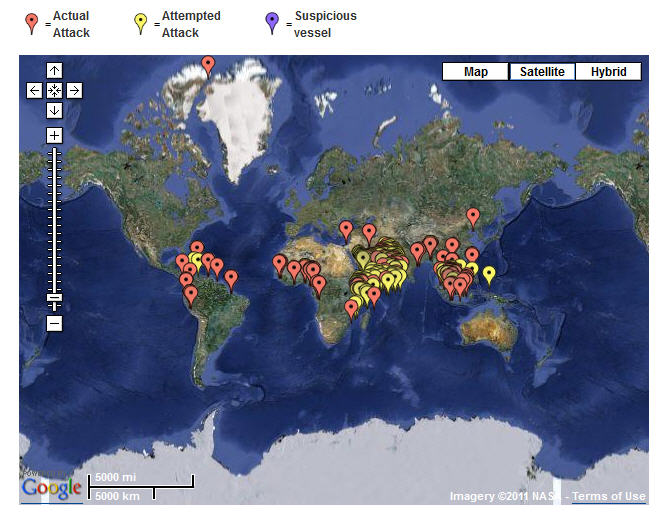 The greatest global piracy threat is represented by Somali pirates, who have moved farther off the Somali coast deeper into the Indian Ocean, off Seychelles and the Maldives, and further south along the East African coast, off Kenya, Madagascar, and Mozambique, as the IMB’s 2011 report says. Somali piracy tactics have mainly centered on hijackings and kidnappings – lasting an average of six months – to extract large ransoms. They don’t use violent tactics because it is in the pirates’ interest to keep their hostages alive. In 2011, average ransom payments to Somali pirates were above $5 million meaning that they are the second largest generator of money in Somalia, bringing in over $200 million annually.

In other areas, such as Gulf of Guinea, the pirates’ attacks target oil tankers, with pirates seizing the oil and then selling it for a profit on the black market.

The IMB also notes that “2011 has also witnessed a probable extension of Nigerian piracy into neighboring Benin waters.”

In South-East Asia, piracy has focused on the ransacking of cargo fishing products. While attacks in the South China Sea decreased in 2011, the number of incidents off Indonesia rose for a second consecutive year. These attacks have largely taken place in the Malacca Strait, through which 30 percent of the world’s trade (VOA) and half of the world’s oil shipments pass.

Piracy is any illegal act of violence, detention, depredation committed by private parties, on the high seas, against another ship, persons or property on board such ship. The offence must be committed in an area which does not fall under the clear jurisdiction of any particular nation. Voluntary participation with knowledge in such acts or even inciting or facilitating such an act is to be considered as piracy.
The definition of maritime piracy under UNCLOS is more specific than previous definitions under international laws. The UNCLOS definition includes acts committed aboard aircraft as well as seagoing vessels.

If you are one of the victims of a maritime piracy incident, an experienced maritime lawyer has the potential to help you determine if you hold a viable legal claim and what choices are accessible to you.

More importantly for a maritime lawyer, the UNCLOS definition specifies that acts must be committed outside of the jurisdiction of any state. If an act occurs within the territorial waters of a nation, it is within the jurisdiction of that nation. A maritime lawyer should be aware that some nations are reluctant to prosecute piracy under international jurisdiction because they are concerned that the accused, if prosecuted successfully, may request asylum for themselves and their family members after they have served their term of incarceration.